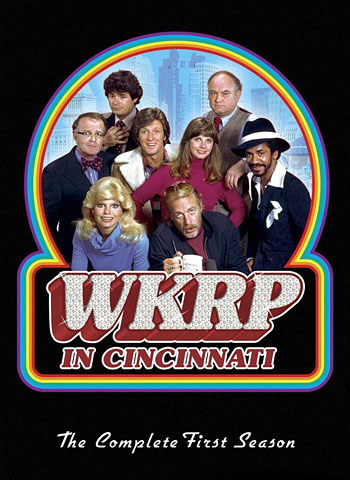 Among my more recent rentals is WKRP in Cincinnati, season one. I am remarkably disappointed with this DVD set. I’ve long read that the program would never come out on home video because of the volume of popular music incorporated into each episode. The songs were licensed for on-air broadcast and syndication only. Sale of television programs for home viewing wasn’t yet a glimmer in the industry’s eye so there was no accommodation for it in the contracts.

So imagine the holders of the rights to the music in the program. They can ask whatever they want. But the music industry, being what it is, seems eager to kill the goose that lays the golden eggs. So goodness knows what princely sum they asked, thinking they had Fox video over a barrelhead!

But Fox would have none of it. They replaced all the music we know with generic rock. If this isn’t bad enough, the music was part of the program and often chosen to fit with the story and play a role of its own. But no longer. It’s all been replaced. And where dialogue occurs over music background music, the scene was either cut entirely or shortened because the separate audio elements were not available to those preparing the DVD.

The packaging claims the enclosed program is the complete first season, but don’t believe it. It’s far from complete.