Yesterday evening, my nephew Steve and I had a real treat. We travelled to Toronto to see Medeski, Schofield, Martin, and Wood perform at Massey Hall. They’re touring in support of their latest album, Juice. 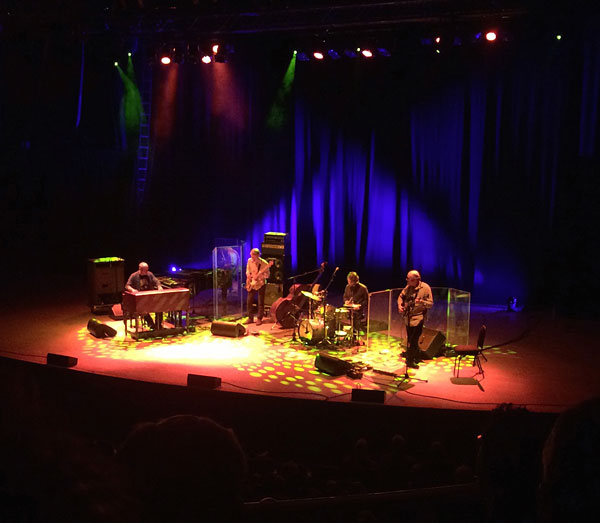 In the photo you see John Medeski, Chris Wood, Billy Martin, and John Scofield, from left to right.

Despite leaving nearly two-and-a-half hours before the show time, we dropped into our seats with less than five minutes to spare. There was snow earlier this week, but the biggest issues were the Toronto Raptors game scheduled for the same evening and the ongoing construction on the Gardner Expressway.

It was a wonderful show, and if you weren’t there, you missed out! Those guys … they made it look so easy, sometimes even to the point that I couldn’t believe the musical complexity I was hearing based on their seemingly simple movements. Not only that, but they play so well together. They looked loose and relaxed, but their sound was tight.

It occurred to me during the show that one seldom sees a keyboard player without a synthesizer, especially live. This thought came to mind because Medeski used only a grand piano and what appeared (to Steve) to be a Hammond B‑3 organ. He also had the accompanying, and completely bizarre, Leslie speaker. In fact, they all had very simple instrumentation. Schofield used one guitar, Wood had an electric bass and a double-bass, and Martin played a surprisingly basic drum kit. It worked for me because the playing is what’s important, and they brought that in spades.

I am so glad we went. A great show and good company.

I’m alarmed…at the force of their ineptitude