…you can read every online tip on winter car control, but be honest, all the theory in world won’t make you as handy on ice as your average Finnish racer. Finns are born with frost in their blood, and vodka in their glovebox. They do not fear snow, or ice, or moose, or awkward silences. 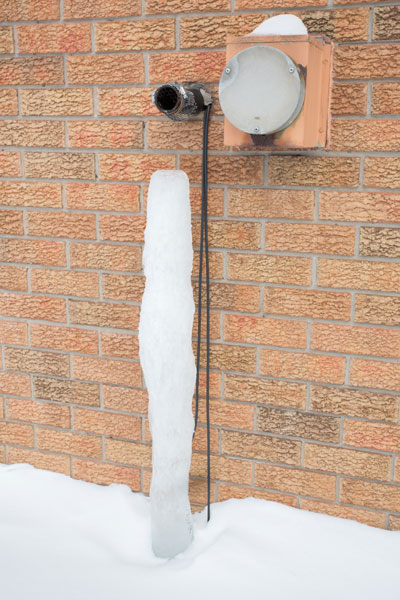 I was out in the yard yesterday, digging my way through the snow to the shed. I happened to look back along the side of the house and saw a very curious formation of ice that stopped me in my tracks.

What I saw simply didn’t compute. It was a pillar of ice just over 1 metre tall and nearly 10 centimetres wide, standing on its own, beside the house.

It was directly under the furnace exhaust, and surely that was no co-incidence. Once my mind started working again after being blown, I thought perhaps the furnace exhaust cooled as it exited the house, and the moisture in the warm air condensed onto the inside of the cold pipe. It finally dripped to the ground and gradually created the ice stalagmite you see here.

My nephew, who has forgotten more about HVAC systems than I’ll every know, confirmed my suspicion. He told me that he’s seen this kind of thing before and it was no doubt caused by the cold weather we’re having.

Before the last few years, I haven’t lived in a house in more than fifteen years, and for the decade before that, I lived in other people’s houses as a border, so I’ve never really needed to know things that homeowners know. This may be old-hat to you, but it’s new to me!

In photography, show and tell, weather

We’re in the midst of a few hours of freezing rain. It won’t last long as the temperature will climb above freezing in about an hour and continue to climb until tomorrow morning. Bizarre. Regardless, when I see that white frosted sheen on everything, I can’t help but go out, even if it’s just into the yard.

It’s chilly out. We’ve certainly experienced colder temperatures, but this cold comes with wind and twenty-odd centimetres of snow that’s fallen since this time yesterday, so it’s a bit of an adventure out there.

The snowblower ran out of gasoline while I was clearing the driveway. As I refilled it, the neighbour came over with his snowblower to help. That was nice of him.

My niece-in-law is taking this weather a lot harder than I am. She grew up in an area of the world that doesn’t get this cold. It makes me realize that it must take time to get used to it!

I visited my sister and brother-in-law this evening. Preparing to return home, I started my car and brushed off the snow deposited by the wind. As I did that, I detected a subtle kerosene scent. That means it’s cold. Diesel fuel thickens in the cold and given low enough temperatures, it will clog fuel filters and injectors, cutting off the fuel supply entirely. To prevent this, refineries add kerosene to diesel fuel in the winter. It does impact fuel economy, but it allows the fuel to continue to flow freely. I don’t know why, but when the temperature dips to –15° or lower, you can detect the subtle scent of kerosene close to a running diesel engine in a stationary automobile, if you pay attention.

The temperature also affects how the snow sounds as one walks. Around freezing, one’s footfalls are silent or accompanied by a quiet thud as the snow collapses and is compressed. At about –10º it begins to crunch. Eventually, at perhaps –20º, the sound rises in pitch. A car approaching slowly gives off the sound of an almost squeal, as if it were powered by the souls of the damned. Or something.

Sometimes, extreme conditions make us appreciate the things we take for granted. My mom mentioned to me that the people in our prehistory who invented shelter did a really good thing. She extended her approval to those people who figured out central heating.

I like the winter. I think the seasons would be boring without it. That said, it would be unbearable without a nice warm home to which I can retreat when I’ve had enough.

In me, photography, show and tell, weather

Yesterday, the news was awash with warnings about the coming freezing rain. I wasn’t convinced because the forecasts around here are Toronto-centic and if their temperature would fall into that narrow freezing-rain zone, there was a fair chance that ours would not. I was wrong. It’s much worse in Toronto with one CBC-Radio reporter calling in from home stating that the cars on his street are covered with 20 millimetres of ice! There’s perhaps 5 millimetres of ice on flat surfaces here but it’s enough to bring back memories of the week-long eastern-Ontario ice storm from January 1998.